The highway's jammed with broken heros on their last chance power drive.

I haven't posted in a while. Actually, I haven't even seen this page since the last time I looked at it. I guess that makes since but I mean since my last post.

I thought that since the year was over, I'd add another post. I'm trying to build my numbers. Actually, I don't really blog anymore. I'm not sure why. I guess I just ran out of things to say or the dreaded Facebook took over or I took my wife seriously about spending too much time on the computer. All are true, of course.

It's been a great year. This time last year I was unemployed and starting to get worried. Now I have a great job and don't worry about much. Except everything having to do with my son. Funny, he couldn't be a healthier, smarter, more cool guy but I still worry.

I realize that I have a finite number of times left that I can rub his head and say "Good night, buddy. I love you" before I go to bed. Not for any morbid reason but just that sooner or later that would be weird.

I worry that if he has juice instead of organic juice, he'll end up in a bell tower with a rifle. I worry about when he realizes I'm not the greatest and far from it. I worry that when he picks up on "Daddy Juice" being beer all words of wisdom from me are gone.

I guess that stuff like that are typical dad stuff. I assume my Dad did it but I never thought much about how he felt until I had a son.

Anyway, so much for that. Happy New Year. Maybe I'll try and post more in the new year. And not worry so much.
Posted by Ferdlings at 10:16 PM 2 comments:

They are Going to Take It!

NEW YORK—In a stunning reversal of their long-stated reluctance to take it, members of heavy-metal band Twisted Sister announced Monday that, after 24 years of fervent refusal, they are now willing to take it. "I acknowledge that we promised not to take it anymore, but things change. The world is a different place today, and with that in mind, we would like to go on record as saying that, starting right now, we are going to take it," read a statement released by the band's lead singer, Dee Snider. "To clarify, we would still prefer not to take it, but as of now, taking it is an option that we would be open to. That is all." Bassist Mark "the Animal" Mendoza also stated that, in regards to what he wants to do with his life, he no longer solely wants to rock, but would instead prefer doing other things, such as raising a family and working as a claims adjuster in Rye, NY. 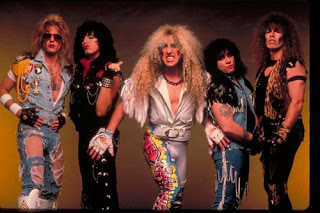 Many props to Kyle for representing.
Posted by Ferdlings at 10:08 PM 1 comment:

Captain TiVo and the TiVo Freak

I ended up at Best Buy this weekend to inquire about HDTiVo. I was looking at it and reading through the paraphernalia, sort of boning up on what they had to say about it since I can't seem to find all the answers on TiVo.com.

I was chatting with the guy who was very nice but not overly helpful and I explained that I've had an HD TV for a while but can't really utilize it since I can't let go of TiVo and I had hoped the wonders of TiVo were as simple at they should be with HD as with the standard version and on and on and on.

He said "You must really like TiVo...." I didn't think much of his statement at the time but thanked him and went on my way still wondering if converting would be as easy as it should be.

After I got home I saw myself in the mirror and realized I was wearing my TiVo shirt. I felt like one of those Trekkies that goes to Star Terk conventions dressed as Nurse Chapel.

I was feeling saucy when I got my first TiVo and added the t-shirt to the order and wear it a lot since it fits well (and goes with anything). I was slightly embarrassed but soon felt happy that the guy would have great story to tell for years to come. "Yeah, this TiVo freak comes in one day telling me all about how great he is having a TiVo and is ready to make the jump to hyperspace with an HD model...blah, blah, blah... I bet he sleeps in that shirt."

I haven't posted in a while. I apologize to the fans. I've been too scared. Hopefully, this will jump start me and get me rolling again.

Last year I posted a pic of Samuel's class at school. I figured why not do it again. 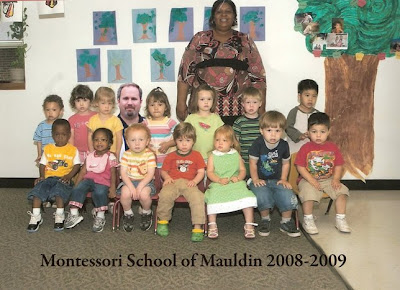 Like any red-blooded American male, my son likes to watch TV and rock out to awesome rock stuff. I'll play different concerts or videos and see if anything catches his attention. Although the number one favorite is "Speed Racer" since it has cars in it, lately he's been asking for "man". It took me a while to figure out what TV show "man" was but after weeding out all the videos with cars in them and all the Pooh bear stuff I discovered he wanted Black Label Society featuring Zakk Wylde. Hmmm...

I've been getting this phone call lately, as shown here: 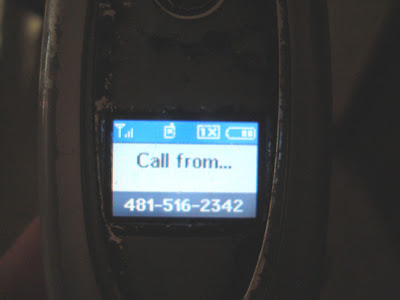 Well, "getting this phone call lately" is like saying there are a few stars in the night sky. I get about 5 or 6 per day with the current record being 9 in one day: 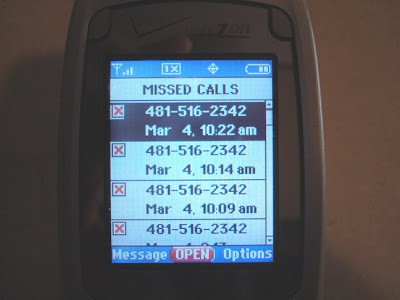 It's really become quite bothersome. I was at first worried that someone was out to get me. Then after my first Google search of the number, I hoped that it was only 'someone' out to get me, not something else.

Those numbers play quite a big roll in the series and bring good times as well as doom and destruction. (I guess they still do, I quit watching after season two.) I bet there are some folks out there that would really get freaked out about that. So why are they calling me?

After my second Google search, I learned that it's generated through a service called "prank dialer" and it's just animated laughter or guys making chicken sounds on the other end of the line. I wouldn't know, though, I'm too scared to answer.
Posted by Ferdlings at 8:37 PM 6 comments:

Today is my birthday. I'm 41. They say life begins at 40 so I'm saying 41 is the new 40. I made a few comments last year about turning 40 in this post. The feelings are pretty much the same. Turning 41 just doesn't much matter.

I did want to say that I'm always caught by my birthday being in print or hearing someone say it. "The committee meeting on whether it's a creek or a stream will be held this Monday, February 9th at 7pm". My immediate thought is 'that's my birthday'. I guess maybe everybody feels a little strange when they see their birthday somewhere. But today is my special day. A day just for me. A day that I share with, on average, one out of every 365 people on earth. 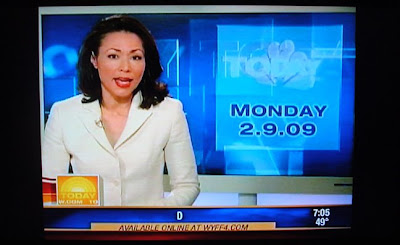